skip to main | skip to sidebar

Bill Howard from Technoride has just posted one of the best reviews on the next generation BMW 7 Series. As we mentioned yesterday, the 7 Series reviews keep coming out, since more and more european online and offline media are being invited to test drive what some call “World’s Best Car”.
Yesterday, we showed you a comparison between the BMW 730d and the Mercedes-Benz S320 CDI, but since the article hasn’t really gone into many details regarding the 7er, we are here to fix that: Technoride’s review comes in at the right moment and it covers everything and anything there is to know about the 2009 BMW 7 Series, from the new gadgets, to the new technology behind the amazing ConnectedDrive and of course, to the “amazing grace at speed”. 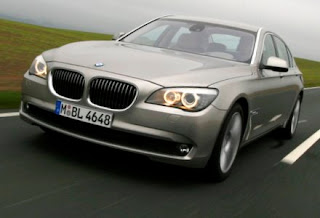 Thank you to our friend Jonathan Spira for sharing this great review.
Here is an excerpt from Bill’s article and the full story can be found here.
BMW’s 2009 7 Series stands as the new benchmark for technical and driving excellence among cars. With more efficiency and more power, an iDrive controller that’s nearly fixed (really and truly), Internet access, plus a dazzling array of comfort, entertainment, handling, and safety features, this is the car you should buy if you’ve got $85,000 burning a hole in your pocket. I drove a prototype 7 Series over the summer on BMW’s proving grounds in Miramas, France. Here’s a fuller review of the production version of the 7 Series, driven on public roads in and around Dresden, Germany.
————
Nothing else that weighs 2-1/4 tons and measures 3 inches longer than a Cadillac Escalade comes anywhere near the performance of the fifth-generation 7 Series. Most of all, the 7 Series performs well for the driver on narrow roads, on wet skidpads, on unlimited-speed autobahns. Under extreme braking, there’s never any twitchiness suggesting the front and rear ends want to swap positions, something I’ve encountered in a couple American high-end sport sedans. The new iDrive controller helped me find information faster while driving and the optional head-up display (about $1,200) put the most important information at the bottom of my field of view through the windshield. For those without an HUD, the same key information goes into the instrument panel.